A home pregnancy test is a real lifesaver if you want to find out from the very beginning of your pregnancy. But the most important question which every girl wants to know is when it’s time to use it.

“You’d better take a pregnancy test early in the morning”

Is your future pregnancy planned and are you looking forward to the time you can take a test and get the definite answer with two desirable stripes? Or on the contrary, is such a picture haunting you because you aren’t ready to become a mother due to your present life situation? In any case, you try to find out the answer to the most exciting question: “Am I pregnant?”. So, let’s talk about the most suitable time to take a home pregnancy test and get the accurate results.

Since the very moment of the placenta formation it starts to secrete a specific chorionic gonadotrophic hormone, which stops the ovaries from producing egg cells to prevent the beginning of a second pregnancy. The detection of the very hormone is the basic principle of the early pregnancy diagnosis.

So, chorionic gonadotrophic hormone (hCG) is the main indicator of the beginning of the pregnancy and its further normal development.

As we have already said, it’s produced by the chorium or placenta after the implantation (the process in which the human embryo adheres to the wall of the uterus on the seventh day after the ovum fertilization).

At the very beginning of the pregnancy (during the first weeks) the level of hCG increases gradually and doubles every two days. The maximum concentration of hCG is from the eighth to eleventh week of your pregnancy. Then it begins to go down. If you have a multi-fetal pregnancy, the level of hCG will increase in proportion to the number of fetuses. The low level of hCG can be an indicator either of an ectopic pregnancy or of a threatening miscarriage.

What people like reading:  The first signs of pregnancy on the first weeks

Why is it connected with the pregnancy?

HCG is a glycoprotein which consists of two sub-units. At hospital, they use a test for a unique beta-sub-unit of the hormone to identify the hCG level. At home, we usually take test strips which are based on the less complicated method of work.

With the help of the beta-hCG level in your blood your pregnancy can be diagnosed in 6-10 days after a successful fertilization. Besides, the level of hCG in blood is two times higher than in urine. So, the concentration of hCG in the latter substances will be enough for a test only two days later.

Thus, several days before the expected date of the period there are already some traces of hCG in the woman’s blood which can be identified with test strips since the first day of your delayed menstrual period. As the test manufacturers said in their instruction leaflets. But according to the research it’s not true. Having taken 18 various kinds of home pregnancy test, scientists found out that only one of them is sensitive enough to identify the hCG level of the pregnant woman at the very beginning of it. It means that most of home pregnancy tests can diagnose the early pregnancy only in 16 % of 100%.  As for us, it’s a doubtful result.

So, when is it time to take a pregnancy test to get an accurate result?

The most suitable time is in about a week after the expected date of your period. By this time the level of hCG in the woman’s blood is enough (25 mlU/ml ) for the test to identify it.

What people like reading:  The Best Day: Unusual Ideas for Weddings Theoretically, you can get the positive answer on the 7th day after your ovulation. But on the 10-12th day after the ovulation there can be false-negative results (i.e. you’re pregnant, but the test shows you only one strip).

Remember: if the test gives you a negative result, but your period doesn’t start, you’d better take it one more time in a few days. You shouldn’t think that one negative result means the absent of pregnancy, especially an early one.

The necessary conditions for taking the home pregnancy test

At first check the period of validity on the test packing. It’s better to buy a new one, but not to use the one you’ve been keeping in your bathroom for some time (in all that humidity). You want to get a definite answer, don’t you?

Read the instruction leaflet attentively, as different tests have their own ways of usage. To get the most accurate result, take a test early in the morning. As when you just get up, the concentration of hormones in the urine is at its maximum.

What to do when the second strip is vague?

If you’ve got a positive result (even when the strips are indistinct), there is a big probability that you’re pregnant. It’s called a weakly positive result.

In such a case you’d better to take one more test in a few days. If you get a more accurate answer for the second time, accept our congratulation – you are pregnant. In case with a negative result there can be an early spontaneous abortion. We know that it’s hard to resist the desire to take a test right after the conception or on the first day of your delayed menstrual period. But if you wait for a while, you will get the definite answer to the most thrilling question.

Child’s development at the age of 3 monthes 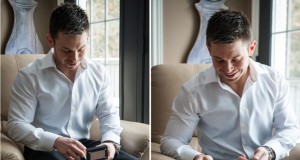 Gifts to Give Your Groom on Your Wedding Day

Jennifer
Wedding gifts are presented not only to visitors, but also to the bride and groom from one another. We have already given some advice...