From this article you’re going to learn what is good about stand mixers and who needs it in the kitchen.

The testing of the stand mixers was performed very thoroughly, all the samples were tested under the same conditions. The mixers were to work to their maximum: beat egg whites, creams, and mix dough. As a result of one of the experiments, when using the same amount of products and using the mixers all together, we got ready dough for 16 pizzas at once!

Let’s get more specific about each device. 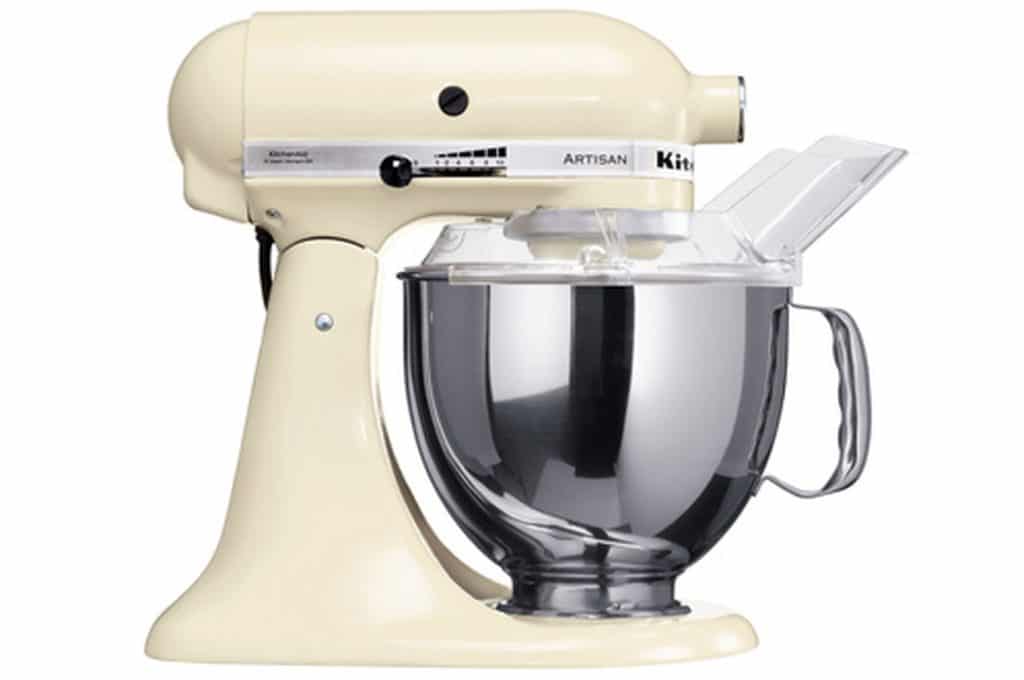 Appearance. KitchenAid impresses you at first glance. You want to admire the beauty of this device, it’s hard to imagine that it could occur to somebody to lock it up in a cupboard and take it out only for cooking. Of course, such a sophisticated mixer needs a decent framing – the kitchen must be suitable!

Control. During the usage of this devices, we didn’t look in the manual, but there were some difficult moments. KitchenAid turned out to be the most comfortable – everything is clear at the first glance, and what is important, you can lift the head aside with one hand.

Changing the attachments. When you are cooking in the kitchen, you make a lot of movements, so it is very important to have a convenient attachment change, to remove the bowl with one sweep and to insert it back easily as well. The KitchenAid has a comfortable bowl with a handle that allows you to take it with one hand, so even its weight isn’t its drawback. To get use to installing it back to its place with one hand, takes a while. Changing the attachments isn’t that easy. For the first few times we had to spend some time trying to understand how to take them off and how to install them again.

All the mixers coped with beating egg whites equally well. In the experiment with making dough KitchenAid and Smeg were the first to mix all the ingredients and form a dough lump.

Summary. A beautiful, streamline, colourful KitchenAid ARTISAN would suit to those who have enough working area in the kitchen to place it; those, who like to make dough and pasta by oneself; who has a big family or a passion for cooking on a commercial scale. We like this device because of its design, the fact that it allows you to lift the head with one hand and the ability to beat even a small amount of product. Appearance. Bosch is profound and squat, it impresses you with its visual pragmatism – it is clear, this one is a hard worker that you can give any difficult task and it will cope with it. This device is very stable – useful suckers at the base that under the weight of the device become attached even more securely, so there is no possibility of sliding of the device at all.

What people like reading:  10 Fun Ways to Use Mirrors as Decor

Control. It should be noted that it isn’t a usual planetary mixer in the classical sense, this one is a multifunctional food processor with the option of 3D planetary motion of the attachments. It has a very convenient mechanism of lifting its head. While cooking, when you have to change an attachment or to take out a bowl quickly and without thinking, pressing just one big button that you cannot miss is very convenient. And then you can put it down with one sweep.

Changing the attachments. This mixer has the heaviest bowl among all the tested samples. This bowl has no handle but it has rounded edges for your fingers, nevertheless you won’t pick it up with one hand. There were some problems with attachment changing. By mistake, we twisted off something that shouldn’t be twisted of. The conclusion is that the attachment changing is inconvenient, when taking it out, you should apply some strength, so the attachment doesn’t go out smoothly, each time it hits the edge of the bowl.

Bosch spread dough on the whole bowl and mixed all the ingredients, but it took the device more than 10 minutes to form it into a lump.

Summary. We liked the Bosсh MUMXL20C Mixer for its stability and matte surface that helps keeping up the appearances without any additional efforts. This device has a variety of additional options as a blender, attachments for cutting (that were left outside the tests performed) that can easily make up for the drawbacks of dough preparation. 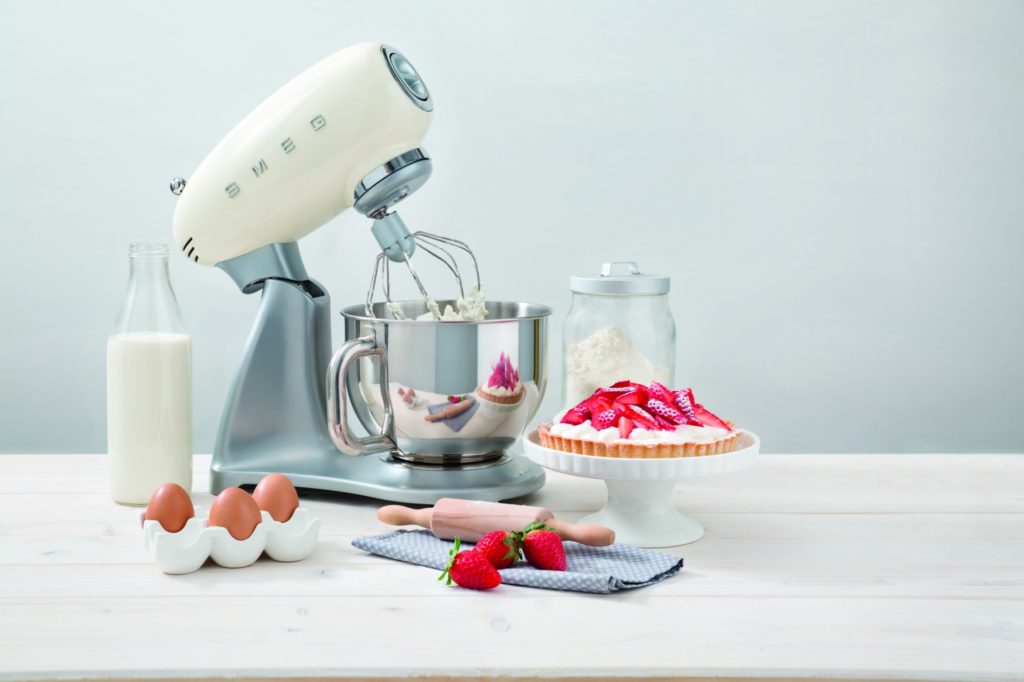 Appearance. As the KitchenAid, the Smeg mixer provides a very good impression at the very first sight. You even have a wish to pet it.

Control. The mixer has 10 speeds, you can switch from one to another smoothly with the help of a handy lever and even with your little finger, you can do it easily.

Lifting up the head. Smeg lost completely in this option to its opponents: firstly, to lift or to put the head back with your one hand is impossible – you have to use both hands; moreover, if you want to lower the head, you need to make a reversed movement first and only then you can put it down. The conclusion: it isn’t very handy. In the addition, in the position with its head up the mixer is very unstable.

What people like reading:  Culinary Gadgets of April. The Best Practical Things for Your Kitchen

Changing the attachments. The weight of the bowl is less than the KitchenAid one’s is. It can be easily installed. It isn’t easy to change the attachments – you need time and practice to get use to doing it automatically.

This one is the best to mix dough to the clump state. Usually, you mix such dough in the pulse mode, but in this case, the mixer managed to do so in a usual mode and at an average speed.

Summary. The stand mixer Smeg SMF01RDEU needs a lot of working space, but this can be compensated by its work performance and elegant design. If you manage to get use to the features of this mixer such as attachment changing and the head lifting system, and do them automatically, you can buy it as a helper for sure. Moreover, this device is very similar in its specifications to the KitchenAid. 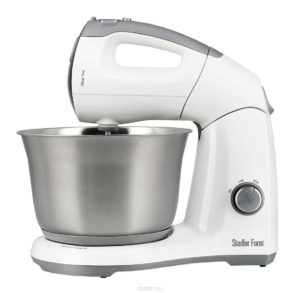 Appearance. Stadler Form Mixer II is the most compact among all the tested samples and great for a kitchen with not enough free working space, and, moreover, it is much lighter than all other mixers.

Control. As in the case with the rest of the devices, the controls here is user-friendly. Additionally, there’s one great advantage: it has an electronic control, that allows you to choose speeds and the display says for how many seconds or minutes the mixer has been working. It’s a great option when you need to watch the time. For example, if we make preparation for hollandaise sauсe, we have to beat it for several seconds.

Lifting up the head. We had to rack our brains working with the Stadler Form Mixer II: we just couldn’t understand how to put the head of the mixer up, where to press the button. We even wanted to look into the manual, but with plenty of patience we managed to sort the things out. To put the head of the mixer aside you should use both of your hands: at first, you need to press the button at the back of the device and simultaneously lift the head itself. The same thing you have to do, if you want to put it down. Unlike the Smeg, this mixer in the position with its head up is very stable, obviously, due to its light weight.

What people like reading:  Culinary Boons of December. Interesting and Useful Tools for Cooking

Stadler Form Mixer II coped with mixing the dough for pizza, but it took the device a bit longer than it was in the case with the Kitchen Aid and Smeg mixers.

Summary. Beyond the humble appearance of Stadler Form Mixer II, one can find an excellent helper about the house, the one you can get out of the cupboard with one hand and get straight to work. It’ll stand a housewife, who likes to put everything away, in good stead. Moreover, it’ll be useful in cooking receipts when you need to beat something using bain marie. You’ll like it for its small size and user-friendly handling. In our opinion, this is the best model in principles of value for money and space saving factors.

Conclusion. If you deal with small amounts of products, you can easily do without a stand mixer. Beating one yolk and 20 gr of sugar can be a true challenge for stand mixers. Even the KitchenAid couldn’t cope with this task. We were able to beat the yolk only a little, thanks to the down tapering form of the bowl.

Surprisingly, Stadler Form Mixer II succeeded in such a ‘small’ task. We managed to beat the yolk with sugar using a manual mode: we had to take the device into hand and give a slope to the bowl. But this is likely to be a nice surprise – others failed this test.

If you cook for a big family, like to treat friends, or you are interested in cooking, a stand mixer will be useful. Even cooking an ordinary apple pie will be much easier, saving both time and effort. For beating eggs to foam, mixing dough, whipping creams, or even try to make true confectionary masterpieces, a planetary mixer is a must have. Unless you want to build muscles. The Techniques of Classical Relaxing Massage 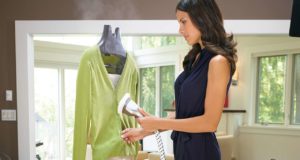 Jennifer
Our colleagues, who absolutely hate ironing, endeavored to test steamers as an editorial experiment. Will they be able to replace irons and how thorough...